By Redd the Fox

Your Age: 21 Rules: Yes Timezone: GMT - 7 (Mountain Time US & Canada)
Referral: Through a Friend
Discord: Redd#8687
Define metagaming in your own words: Using OOC information and applying it ICly, when your character shouldn't know it.
Define powergaming in your own words: Forcing your actions onto others to where they have no chance of fighting back when they can at that moment.
Status: Denied

Cadzek was born in a country known as the Lonelands, a land outside the main country that took a combination of forest and savanna together and mashed it into one land. The kingdom's history mainly consisted of war over the years, Cadzek's father becoming the new commanding leader of his own platoon after a war between his people and a Northern raider people. Cadzek's mother was a pure high elf whom saw other races equal to her own species after a human saved her life from wolves in the middle of nowhere when traveling. Because of her views of other races the high elves disregarded her and eventually she left the city of Haelun'or. She found herself in the Lonelands during the war, where she met the father, tending to wounded soldiers as a natural herb healer. She became the most well-known apothecary in Tristlebridge. Cadzek's father is a wood elf that was born and raised in the Lonelands, however he did not live a comfortable life such as the mother did before. With no parents (unknown of their fates) the father was forced to scourge for scraps in the city of  Fristlebridge, a military-ran city. There he joined the soldiers and trained to be the best.

Because Cadzek was under the care of the city's best commander he was given a lot of luxuries most would not be able to have at such a young age in the Lonelands. Starting at the age of 10 Cadzek was not only going to a general school within Fristlebridge, but also participated in his father's new soldier program known as Vlahir Training. In Cadzek's kingdom the Vlahir are the most elite soldiers, where their weaponry consisted of spears, javelins, shields, swords and clubs/maces while also dawning in chainmail, leather, and half-plate armor. They were the warriors trained to deal with all kinds of threats, from close quarters unarmed combat to full range combat, but their main duty was to protect others from harm. The younger a child was able to start in the Vlahir program the better they would be as a Vlahir themselves, much like our world's Greek Spartans. "A Spearman of the March, a Shield for the Weak, and a Voice of Force. A warrior for the people." Cadzek trained under a halfling mentor, who at first he thought was too small to be a warrior in the first place, but soon realized that size does not matter in the heat of combat. The mentor's name was Grogone, and he taught Cadzek the value of fairness among all people, regardless of race, age, and gender. "My little size was still no match for you, elfling. Don't judge one by how they're born, but how they're made."

Once Cadzek turned 16 he was allowed to go on patrols within and outside Tristlebridge, where he met his best friend and patrol partner Farragor. Farragor is a wood elf born around the same time as Cadzk was, and thus the two conscripts became close friends in the process. By age 18 is when Cadzek made his first mistaken arrest within the city, where he let go of a criminal after he had thought that he redeemed himself somewhat, but once the criminal was released from his bonds he lunged at Cadzek with a hidden blade. Suffering a moderate stab wound Cadzek had to kill off the criminal, sinking his Vlahir's sword inside the belly of the criminal and soon after be taken to his mother for medical care. And from that moment Cadzek saw less of the good he thought was inherent in people. Now whenever he makes a judgment about someone, fairly of course, he sticks to that judgment until they die, giving him a rather stubborn and heartless nature when it came to dealing with any criminal.

By the age of 25 Cadzek was introduced to the art of magic. While on one patrol with his partner they came across a street mage, who was able to perform many magical tricks an stunts in front of a crowd. When Farragor was writing a ticket for a lack of a warrant of performing Cadzek had to stop his friend and allow him to watch the rest of the show. He knew that magic being performed on the streets had a strict policy, but whoever was able to follow it can do so freely. But this was first time Cadzek had ever saw magic in person, he was in awe of it all. After the show was over he allowed the street mage to go off the hook this time only because he gave a good show, and from there Cadzek became obsessed with learning magic. But due to the many wars and the few amount of outside travelers there were no books any spells he could learn. Which is where his attention went towards the outer lands of the Lonelands.

Three years later Cadzek had retired from the military due to his preparation for the outer lands. His friend, Farragor, was placed as captain of the platoon and became a well-know figure. He allowed Cadzek to take whatever he needed from the armory as the training the high elf went through exceeded Farragor's regardless of rank. Only taking the typical Vlahir equipment, as well as food for rationing as his training also gave way to a trait of hunting big game when he needed it (but he rather not be hunting). From there he left his home of Tristlebridge and hiked his way towards the outer lands. 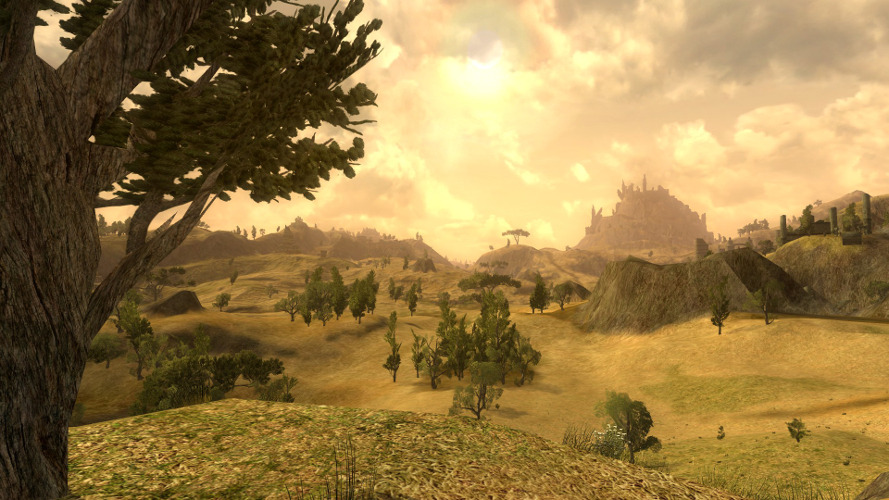 (THE LONELANDS, from Lord of the Rings Online)

How would you define roleplay, and have you ever roleplayed before?: I define roleplay as having to be characters with specific traits and quirks about them and roleplaying them through means of texting and typing. I have roleplayed before.
Are there any rule(s) that confuse you or don’t make sense?: None at the moment.
Character Name: Cadzek
Character Race: High Elf
Character Gender: Male
Character Age: 28
Physical Description: Dark brown hair, brown eyes, thin chinstrap beard, 6'1", fair skin, lean body, clothes consists of chainmail, leather jerkin, and peasant clothing.
Personality Traits/Quirks: Loyal to a fault, righteous and brave, as well as fair and accepting. However, he is stubborn to where once he judges someone they can never redeem themselves to a better view.
What is your character’s biggest fear? What caused them to develop this fear?: Betrayal. Cadzek thought a criminal had redeemed himself and set him free, however the criminal lunged and attacked Cadzek afterwards.
What does your character like most about themselves? Why?: He takes pride in his training and his beliefs of fairness. Both were the defining factors of him being a Vlahir soldier among his people, giving him almost a hero status.
What does your character dislike most about themselves? Why?: He dislikes the reputation his high elven heritage has. He finds it unfair to judge someone by their race, not their skills and personality.
Roleplay Scenario:

Cadzek would look at the man with a confused and surprised expression, not expecting anyone to approach him and ask why he was there. The high elf had never been to the outer lands, let alone expect anyone to approach due to his own species. Regardless he considers his next words carefully, straightening his posture as his backpack rattled with his gear.  "I am here to learn about magic. Where I am from there is little to no books about the magic of the world, and I wish to learn more about it here. Maybe once I learn enough I can go back home."

(DISCLAIMER: The application wouldn't let me upload my own skin of Cadzek as a png, so I posted the png version on this textbox and pasted a jpg in the skin section!)